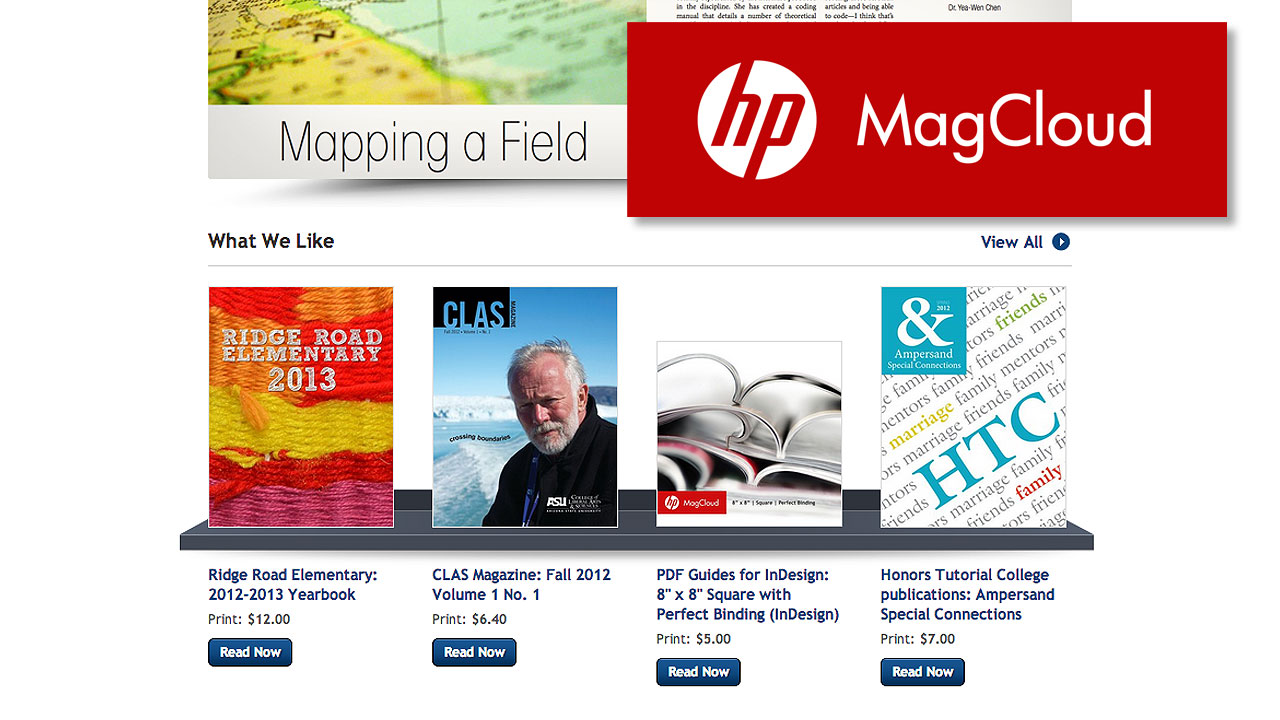 I was very excited when I saw that the school yearbook I just finished had been featured on MagCloud’s homepage under their “What We Like” section. It’s always nice to have your work recognized and appreciated by others.

MacCloud is the print-on-demand service that I have been using for the last three years to handle production of the Ridge Road Elementary School yearbooks. Print-on-demand, for those of you who don’t know, simply means that instead of having to print a large quantity of yearbooks all at once, they’re printed one-at-a-time as needed. You can literally order a single copy of the yearbook if that’s all you want. No more having to estimate how many yearbook you’re going to sell and ordering a minimum of 500, only to have 200 still sitting in a closet years later.

When I came on board as the yearbook advisor, the school had been using Jostens – a name that’s synonymous with yearbooks. I used them for the first couple of years to print a 44-page (40 interior pages, plus cover) black & white yearbook with a custom color cover, and they did a great job. It cost the school about $12 per book, which is also what we were selling them for. The cover files had to be submitted around Thanksgiving and the remaining pages were due on April 1st. Our goal each year was to hopefully sell enough books to break even.

Because of my design background and desire for complete creative control, I never took advantage of Jostens yearbook building tools. Instead, I did all the layout myself using Adobe InDesign. Knowing I could get a little more bang for my buck, I switched to a great online printing service called PSPrint for the next two yearbooks. This offered several advantages: I could print a full-color yearbook with the same numbers of pages for a much lower cost-per-book (under $7); the page size was slightly larger, which always helps on those student portrait pages; and my deadline to submit a final PDF could now be just a few weeks ahead of when the yearbooks needed to be distributed, which let us include photos from events that happened later in the school year.

We typically sell around 300 yearbooks, and with PSPrint you either have to buy 250 copies or 500 copies. Even though we were only paying $6.50 per book, having to order 500 meant that we were still spending as much money as we were with Jostens. So although the product was better, we weren’t saving any money and we ended up with a lot of unsold yearbooks.

Finally I had a solution that offered a great product at a great price and I only had to buy exactly as many yearbooks as we sold.

Enter MagCloud. Finally I had a solution that offered a great product at a great price and I only had to buy exactly as many yearbooks as we sold. They charge 20¢ per page to print, but when you buy in bulk – more than 20 copies at a time – they sell you the books at a discount. This meant that to buy 300 copies of the yearbook, we were only being charged $6.60 per book. For the first time, yearbook sales were actually making money. We passed some of the savings along to the parents and started selling the yearbooks at $10 each, and the PTA reinvested the profit back into school programs.

The only downside to using MagCloud is that you do not have the option to print the cover on a heavier stock as we did with Jostens or PSPrint. The cover stock is the same weight as the interior pages, and the entire yearbook feels more like a typical magazine (they are, after all, a magazine printing business). Children tend to manhandle their yearbooks and the lighter weight covers took quite a beating; the edges were quickly worn and several covers fell off entirely. They’re easily fixed with some clear tape along the inside of the spine, but it’s something to consider.

There’s one more reason why I really like MagCloud, but I’ll save that for a future chapter. Although not entirely perfect, I think MagCloud is a great option for anyone looking to self-publish a softcover school yearbook. If you can create a PDF, publishing with them is as easy as uploading the file, setting your price and clicking “Buy Print.”